On September 23, 1846, German astronomer Johann Gottfried Galle discovered the planet Neptune, the eighth planet in our solar system. To celebrate this landmark event in astronomical history, here are five things you probably didn't know about the planet Neptune...

Neptune's Presence Was Determined Before It Was Actually Spotted 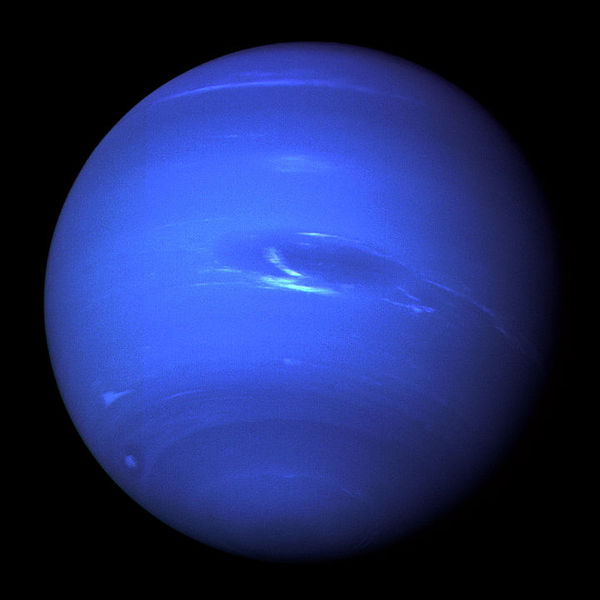 Astronomers had known for years that Uranus displayed some odd behavior that couldn't be explained using then-current physics. The planet's orbit had noticeable irregularities that suggested there was another large body nearby. Two scientists, British mathematician John Couch Adams and French astronomer Urbain Le Verrier simultaneously (but separately) worked on mathematical predictions of where this large body would be. Adams kept his calculations among his colleagues, but Le Verrier made his calculations public, and German astronomer Johann Gottfried Galle used Le Verrier's calculations to spot the planet Neptune. Galle wasn't actually the first person to spot Neptune, but previous viewers didn't realize that they were looking at a giant planet that was affecting the orbit of another giant planet, so Galle got the credit for spotting Neptune first.

Neptune Almost Had a French Name Galle found Neptune only one degree from where Le Verrier's calculations said it would be. As a result of the amazing mathematical prediction, the planet almost ended up with the name Le Verrier. Astronomers eventually chose Neptune, keeping the new planet's designation in the realm of Greek and Roman gods and goddesses.

Neptune Completed Its First Orbit Since Its Discovery -- in 2011 July 11, 2011, was a first birthday of sorts. Newspapers noted that it marked one year since the discovery of Neptune. Given that the planet was spotted in 1846, that may sound strange, but it's not when you realize that it refers to one Neptunian year. July 11, 2011, marked the completion of one full trip around the sun since the planet's discovery.

It's the Only Planet in the Solar System Whose Discovery Was Predicted Mathematically So far, every other planet in the solar system has been spotted first and then become the subject of mathematical calculations about orbital position. Neptune was the reverse; first, the math said something should be in a particular spot, and then a human found the planet almost where it was predicted to be.

Only One Spacecraft Has Visited Neptune Assuming that Earth is the only planet that's been sending craft around the solar system, then Neptune has received a visit from only one: Voyager 2 in 1989. Voyager 2 managed to pass by both Neptune and Triton, its largest moon, and it got pictures of both that showed fine details of rings and the spots that giant storms made on the planet's surface. Voyager 2 produced the classic image of Neptune that showed the Great Dark Spot in the planet's southern hemisphere. That spot actually disappeared by the time the Hubble Telescope got more pictures of the giant blue planet. 5 Things You Didn't Know About The Oprah Winfrey Show