On August 7, 1782, General George Washington, the commander in chief of the Continental Army, created the “Badge for Military Merit,” otherwise known as a “Purple Heart.” Now considered one of the most honorable military awards to receive, it was once a fairly obscure award. Here are five things you didn't know about the Purple Heart...

The Original Purple Heart Was a Cloth Patch 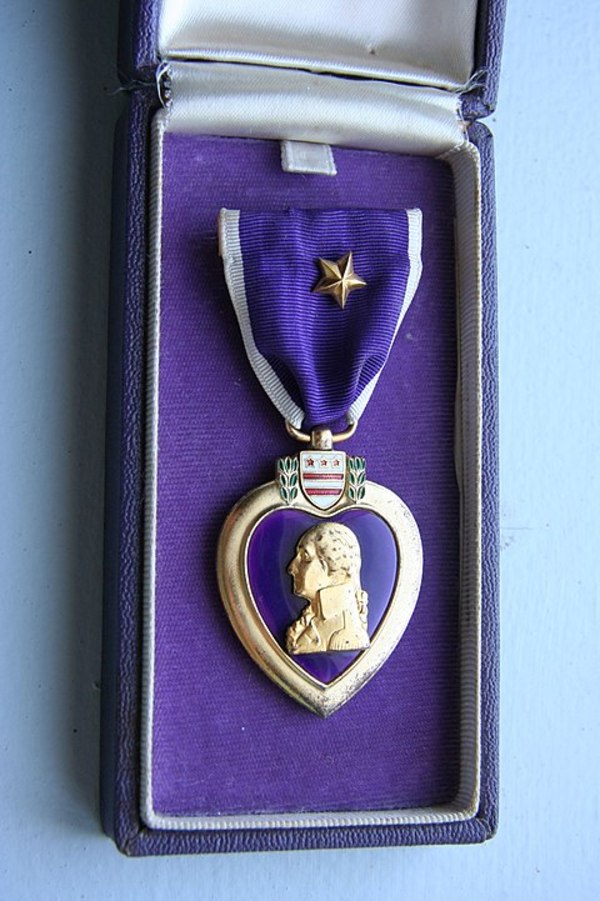 A version of the Purple Heart used in World War II. Photo credit: By Jonathunder - Own work, CC0, https://commons.wikimedia.org/w/index.php?curid=13499413. The current design of the Purple Heart falls in line with other military awards, with a purple and gold ribbon that is pinned to the uniform, and a metal heart with a gold-colored likeness of George Washington. Originally, it was a purple cloth heart, first plain and later embroidered with the word "Merit" in white. The medal was redesigned in the 1930s.

Photo credit: By Photographer not credited. - Naval Historical Center; Direct link. Photo #: USA C-2413 (Color), photograph from the Army Signal Corps Collection in the U.S. National Archives. Much of what we think of when we think of the Purple Heart is based on that redesign from the 1930s. The award wasn't even known as the Purple Heart when it was created; back then, it was a "Badge of Merit," created along with a "Badge of Distinction." This is understandable; when creating the award, Washington likely wanted the purpose of the award to be front and center in people's minds, and so he used names that described the reasons for having the award. The Badge of Merit wasn't awarded easily, and not many people received it in the century and a half before General Douglas MacArthur decided to revive it.

A Lot of Actors, Authors, and Other Famous Creatives Have Received a Purple Heart Many of the actors and authors you grew up watching and reading had past military service, especially if they served in WWII or Korea. Rod Serling of Twilight Zone fame received one; so did Charles Bronson and James Garner. Kurt Vonnegut was another recipient. The Purple Heart is still awarded, of course, so veterans of more recent wars, such as the Gulf War and Afghanistan, are eligible. Recipients include Senator Tammy Duckworth and football player Pat Tillman.

A Person Can (and Has) Receive Multiple Purple Hearts for the Same Incident While it's common to see someone awarded the Purple Heart for their actions during a particular conflict, it's also possible for them to receive multiple awards for the same incident. One example is Curry T. Haynes, a veteran of the Vietnam War. He had already been awarded one Purple Heart for an arm injury (he was shot during an ambush), and when he returned to the front, he was involved in another assault that led to several injuries at once. For that, he was awarded nine separate Purple Hearts in addition to the one from his first injury, making him the only person to hold ten Purple Hearts.

Eligibility for the Award Has Changed Several Times in Less Than a Century The Badges of Merit and Distinction were created to recognize acts of bravery in war that usually went unnoticed by anyone outside the military. They retained that purpose until 1932, when MacArthur added being wounded during battle to the list of reasons to give the Purple Heart to someone. In 1942, the award was restricted to only wounds or deaths in battle; in the 1950s, frostbite was eliminated as a reason to receive the award. In 1984, injury due to terrorism was added as an eligible reason, and in 1989, prisoners of war became eligible. In the 2000s, traumatic brain injury and PTSD have become the latest conditions to face questions over eligibility.